I saw a flower made with Clearly for Art Modelling Film and decided I needed some. It comes in a pack of 3 A4 sheets in clear, black or white. I bought a pack of the clear stuff and had a play. The first thing I stamped was a flower from the Chocolate Baroque Tangled Garden set. I must admit I was surprised how big these stamps are but they are gorgeous. Once stamped, I cut the flower out and coloured it with alcohol ink, then heated and shaped it. I then did the same with a couple of butterflies from the set. 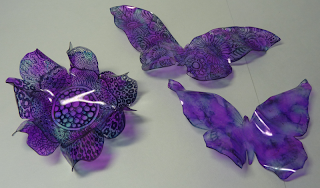 I then cut some flowers using Tim Holtz Tattered Flowers die and again coloured with alcohol inks, heated and shaped. I've seen these layered with paper flowers cut from the same die. 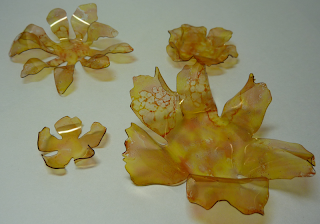 I've also used a Marianne leaf die and a butterfly die. These thinner dies did not cut so well despite as many shims as I could get through the Bug and I ended up cutting them by hand. I also cut some Elegant Florishes from a Bigz die. 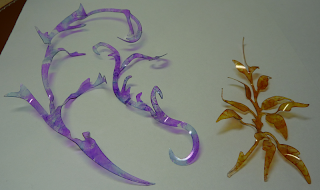 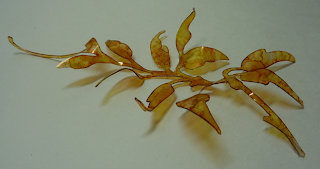 I then tried using the acetate from a Sizzix Bigz die and an embossing folder. These were both thinner than the Modelling Film but still wouldn't cut through unless I used a Bigz die. The results were slightly more fragile than the Modelling Film but perfectly OK. The great thing is that if you don't like the shape of it, you can just reheat it and shape it again. Now I just have to make something to use them all on
Posted by Kimbo at 11:41