I've made a tag from scrap card and coloured it with Pan Pastels. The sentiment stamp is by Inkylicious called Scatter Seeds and the foliage is from their Prickly Shrubs set and both are stamped with Versafine. The backing paper is from a Papermania stack called Regency and I've added some Pan Pastels to the corners to tone it in with the tag. The fibres are from a box I found stashed away. We did a swop on the old Imag-e-nation forum years ago and I didn't get around to using many so they'll probably be appearing on lots of my cards now 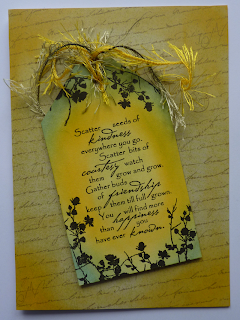