That's the challenge at Cuttlebug Mania this week - to make a different fold card. And they've given us a lovely digi image to use too. I didn't think I'd be able to enter as my printer is playing up (well it's not printing at all). OH's printer doesn't like card at all but after a few wasted sheets of Rymans, I managed to print it off. I've coloured it with Promarkers and cut it with a Marianne die. The card fold is a Double Dutch fold card. We did this at my craft club last year and I'd forgotten about them but thought it fitted the bill for this challenge. There's a good tutorial on Splitcoast Stampers. I've used a rose embossing folder for behind the image and the two small squares on the flaps. On one of the small squares I've used a small greeting from Stampin Up which I've embossed with clear powder and on the other I've put a flower cut with a Marianne die and a small gem in the middle although it doesn't show in the picture.

I'm also entering this into the I Love Promarkers challenge which is Embossing. 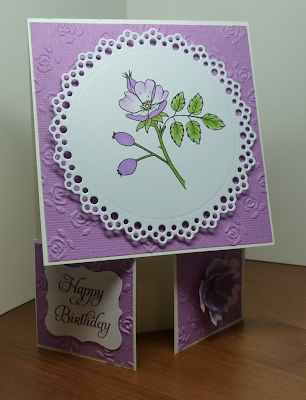