This weeks Polka Doodle challenge is Fairies and Fantasy. I've made my card in Craft Artist and been having a real good play with it. I started with a basic butterfly shape which I imported and made into a stencil. I them imported the topper from the Sugarplum Fairy CD and laid it over the stencil as a backing then cut it. I've imported the fairy from the same CD and used the cutout studio to remove the second image. This makes her like a png image so you can place her wherever you want without a background. I've done the same with the sun and bird. I've also added some flowers from the Picknix CD. Once I had the design how I wanted, I moved the fairy, the sunflowers and second bird to a different page and printed everything off. Then cut the butterfly out and a second blank one for the back of the card and stuck them together. I've cut the elements out and decoupaged them onto the design. For glitter, I've added diamond stickles to the centre of the flowers and gone over some of the design with a stardust pen. Glamour dust has been added to the fairy wings and the centre of the sun. A lot of playing about but I'm quite pleased with the result. 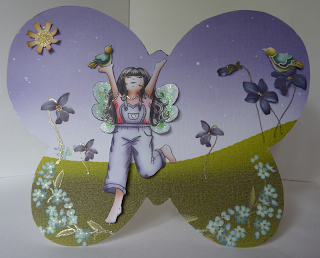 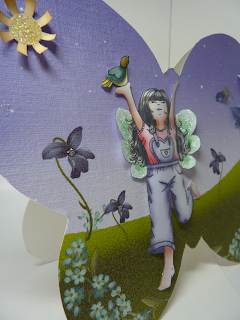