This is my attempt at Shabby Chic which is the current challenge at both Anything Goes and Polka Doodles. As most of my cards go to the animal charity shop, I didn't want to go too shabby so I've come up with this card. The backing paper is a piece of vellum that came from a Papermania Christmas pack a good few years ago. I found two pieces in my pile of oddments and thought this one would go well (the other has holly leaves on). The image is from the Polka Doodles Love & Cherish CD. I wish I'd remembered this CD sooner as there are some great Valentines images on it. The heart lace was bought from a small haberdashery shop in Christchurch. I was so annoyed when I got it as I got talking to the owner and missed my last bus so had to walk the three miles home. I'm so glad that I did get it though as the next time I went past, the shop had closed down. The corners were in my box of bits to use up and the buttons were on the way to the bin when I was sorting out as I thought they looked a bit, well, shabby but I gave them a final chance and here they are. The sentiment is by Craftwork Cards . I've cut a circle of card and stuck some lace to it then stick the greeting to it and that's about it 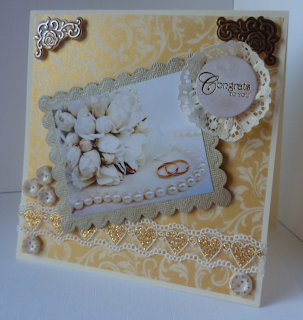